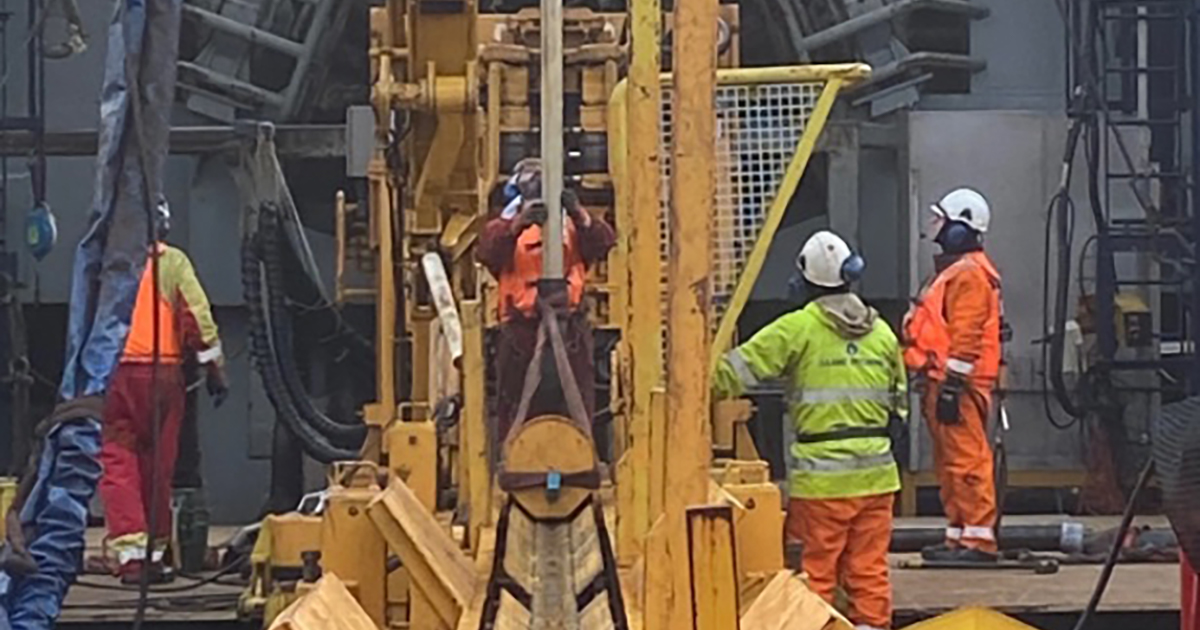 1. Drill core is on its way up to the deck. (photo credit: Norwegian Petroleum Directorate)

The Norwegian Petroleum Directorate (NPD) has conducted another search for seabed minerals – this time facilitated by the use of new technology, new in this context, that is.

The Island Valiant was the vessel used by the NPD during the five-week expedition on the Mohn Ridge in the northwestern Norwegian Sea. The vessel docked at Hareid on the Sunnmøre coast earlier this week, after concluding a successful expedition. On the expedition, operator TIOS conducted drilling operations in 3000 metres of water to secure samples of mineral deposits in the deep sea. The NPD has participated in a number of such mapping expeditions in recent years, both in cooperation with the University of Bergen and on the Directorate’s own behalf.

Several mineral deposits have been proven, aided by detailed seabed data and sampling from the seabed. The deposits include metals and minerals that are important in battery technology, wind turbines and mobile telephones. The Mohn Ridge is an oceanic spreading ridge that separates two tectonic plates. The objective of this expedition was to investigate under the seabed by drilling shallow boreholes in the mineral fields, and to test the drilling technology in these vast ocean depths.

The NPD is also the specialist directorate for seabed minerals. The Ministry of Petroleum and Energy has tasked the NPD with mapping and proving mineral deposits in the deep sea.

The drilling operations were conducted with coiled tubing, which is a continuous drill string coiled on a reel. This is the first time this technology has been used to drill in water depths of more than 3000 m. In addition to TIOS, Island Offshore, Halliburton and Oceaneering have been instrumental in implementing the project.

“This is a true pioneer expedition,” says exploration director Torgeir Stordal in the NPD. “This is the first-time coiled tubing technology has been used in such deep waters, and the first time such drilling technology is used for exploration of seabed minerals.”

“Since this is uncharted territory, we weren’t sure that it would work. But it did. We have taken many samples that will be useful in the work ahead,” he adds.

“The expertise acquired by Norwegian industry after 50 years of experience from the petroleum activities meant that this ground-breaking work was successful. Norwegian technology and expertise lead the way also in this area and demonstrates that they are also leaders when it comes to investigation of seabed minerals.”

This is the third time the NPD has conducted its own deep-sea operations aimed at mapping the potential for seabed minerals. The collected data and sample material will now be analyzed.

“The results will become an important part of the basis for a seabed mineral resource assessment, which is the assignment the NPD has been given by the Ministry of Petroleum and Energy,” says NPD Director general Ingrid Sølvberg.