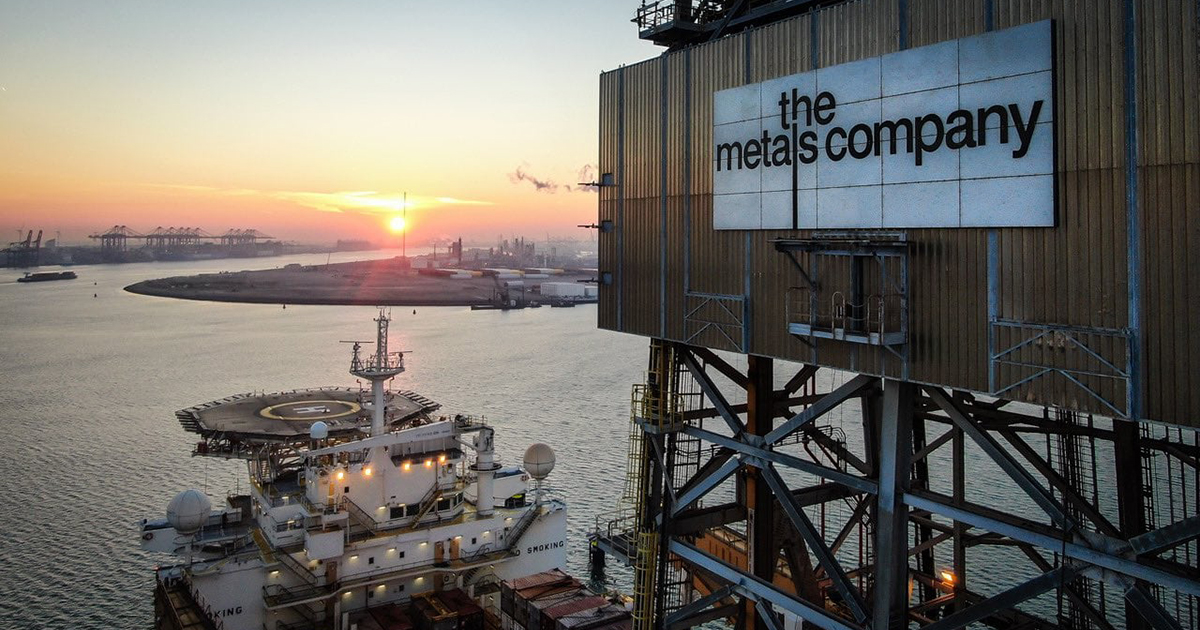 TMC the metals company Inc. (Nasdaq: TMC) (“TMC” or the “Company”), an explorer of the world’s largest undeveloped source of critical battery metals, revealed that recent studies conducted by SINTEF, an independent research institution based in Norway and retained by TMC to undertake test work and value-in-use analysis, confirm that TMC’s nodule-derived manganese silicate product has similar properties to manganese ores and is suitable for further processing into key steel-making feedstocks like silicomanganese alloy (SiMn).

While much of the interest in polymetallic nodules has been driven by surging demand for nickel, cobalt and copper for the clean energy transition, the development of TMC’s vast nodule resource could prove transformational for manganese markets with the potential to become an abundant, accessible source of the important base metal with significant opportunities to reduce lifecycle ESG impacts compared to land-based mining.

Investigators at SINTEF’s facilities in Norway set out to assess whether TMC’s manganese silicate product could meet the specifications required by potential customers in the steelmaking value chain. SINTEF’s report finds that TMC’s nodule-derived Mn silicate has a high grade but lower oxidation state compared to land-based ores, which can potentially reduce the energy intensity — and overall cost — of SiMn production. For a manganese industry accustomed to slim single-digit margins, SINTEF’s findings point to the potential for TMC’s nodule-derived manganese product to improve the economics of alloy production while also reducing the industry’s carbon footprint as compared to manganese from traditional Mn ore.

Vincent Canaguier, a SINTEF researcher who worked on the study, said: “From a metallurgical point of view, TMC's material is promising: its high manganese and low phosphorous contents make it a strong candidate for SiMn production."

Dr. Jeffrey Donald, Head of Onshore Development for The Metals Company, said: “SINTEF’s results show that the manganese silicate product from our metallurgical process is a valuable and high-quality input to the steelmaking supply chain, further validating our near-zero solid waste flowsheet and offering producers of silicomanganese alloy an alternative feedstock that provides an opportunity to lower their costs in comparison to alloy production using traditional manganese ores and other feeds. At current metal prices, we expect our manganese silicate product to represent up to 30% of our future potential revenue, so these results are a major milestone in validating TMC’s value proposition even beyond electric vehicles and into supplying the future critical minerals for infrastructure as well.”

To reach the conclusions, SINTEF carried out high-temperature reduction experiments simulating conditions in SiMn production using TMC's manganese silicate product, together with metallic iron, quartz, coke and CaO additions, and then characterized and compared the resultant products with literature data and industry knowledge. The metallurgists found that the feed mixture reacted at a similar rate to that of traditional manganese sources and that pre-reduction, which contributes heavily to CO2 emissions, could be fully avoided. Results also show that the SiMn was produced within typical specifications and with acceptable levels of impurities.

For the comparative economic valuation, SINTEF employed mass and energy balance calculations on various feed scenarios with unit cost estimates provided by TMC. The evaluation concluded that the production of SiMn with TMC's product as feed can lower costs, as the product has up to 17.6% higher value than traditional ores, based on their manganese content. Comparisons to conventional Manganese Rich Slag feeds were also conducted with similar outcomes.

In 2021, over half of the 20 million tonnes of manganese ore produced globally went into the production of silicomanganese alloy for the steel industry, which is expected to grow at ~3.5% per annum. The resource requirements of such growth are particularly acute in developing states like India, the world’s second largest steel producer, which is targeting a three-fold expansion in steel manufacturing capacity by 2030. In March, TMC announced that it signed a Memorandum of Understanding (“MoU”) with Epsilon Carbon, a leading developer of graphite materials for lithium-ion battery anodes and India’s only company to be backward-integrated into the steel industry, for the completion of a pre-feasibility study for a commercial-scale deep-sea nodule processing plant in India. The companies are targeting production of more than 750,000 tonnes per annum (TPA) of manganese silicate grading around 42% Mn, as well as more than 30,000 TPA of an intermediate nickel-copper-cobalt matte product used for active cathode material (CAM) for Nickel Manganese Cobalt (NMC) and other nickel-rich battery cathode chemistries.

With a potential production capacity of 2.9 million tonnes per annum (MTPA) of manganese silicate, TMC’s NORI-D Nodule Project could feasibly become a major source of manganese feedstock for India and beyond. Since 2020, TMC has been undertaking extensive onshore pilot processing work to convert polymetallic nodules into high-grade critical metals. In September 2021, the Company announced that it had successfully utilised a custom process derived from conventional nickel flowsheets to segregate the base metals contained in nodules into an alloy comprised of high-grade battery metals, as well as the manganese silicate output analysed by the team at SINTEF.

The findings of the SINTEF report and related work by TMC will be presented at the upcoming Conference of Metallurgists being held August 21 to 24 in Montreal, Quebec.